“When you break with someone, stay away from their family” – Man chides Davido for performing at Chioma’s sister’s wedding

Chioma’s elder sister tied the knot with her heartthrob in an elaborate ceremony that was held over the weekend. The wedding was well attended by family and friends. However, to the surprise of many, Davido also attended the wedding and even entertained guests with a mind-blowing performance. 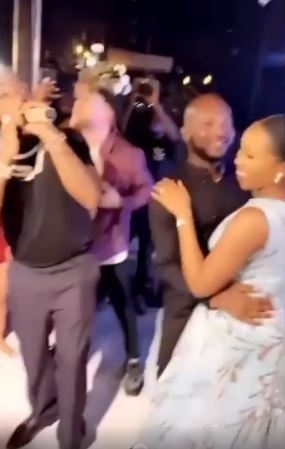 After videos from the event showing Davido performing found it’s way to the internet, A Nigerian Doctor, took to Twitter to chide the 30BG boss.

The Twitter user @DRPenking, opined that after break up, one should stay away from his or her former partner’s family.

According to him, Davido’s presence at the wedding is the height of manipulation.

“What did Davido go to do at Chioma’s elder sister’s wedding? Height of manipulation. This will strike some nerves but when you break up with someone, please stay away from their family. Hanging around makes it damn difficult for them to move on mentally, mental health experts say”, he wrote.