Russian president, Vladimir Putin has warned he could engage in nuclear war.

Russia is in a diplomatic standoff with the West after amassing more than 100,000 soldiers on the Ukrainian border while ramping up military exercises.

Russia continues to deny any plans to launch an invasion, instead pointing the finger at NATO for its expansion in Eastern Europe, however, a video has now emerged showing Putin threatening to engage in nuclear war if Ukraine joins NATO and seeks to regain control of Crimea, the peninsula annexed by Russia in 2014. 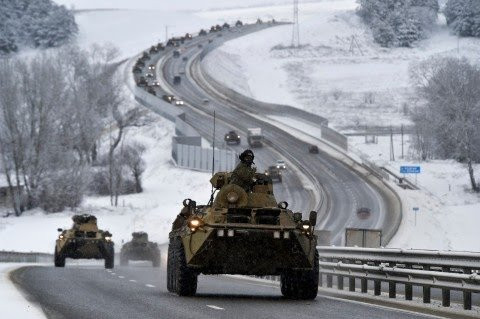 This comes as new footage appears to show the deployment of ‘unstoppable’ new Kinzhal nuclear-capable hypersonic missiles in Kaliningrad – a Russian area bordering Poland and Lithuania.

While Putin claimed his talks in Moscow with French President Emmanuel Macron were constructive, he used a press conference to warn of nuclear conflict.

He said: ‘I want to stress it one more time. I’ve been saying it, but I’d very much want you to finally hear me, and to deliver it to your audience in print, TV and online.

‘Do you understand it or not, that if Ukraine joins Nato and attempts to bring Crimea back by military means, the European countries will be automatically pulled into a war conflict with Russia?’

Putin recognised Moscow’s military power is ‘incomparable’ with that of Nato, but warned his country is still ‘one of the leading nuclear states’.

‘There will be no winners, and you will be pulled into this conflict against your will,’ he added.

As the conversation continues, Putin visibly becomes angry and animated, then says;

‘You won’t even have time to blink your eye when you execute Article 5 (collective defence of Nato members).

‘Mr President (Macron), of course, doesn’t want this, and I don’t want it, which is why he is here, torturing me for six straight hours.’

Russia is the world’s largest nuclear power with 4300 warheads while US comes second with 3600.

Watch the video below