A South African man has opined that all men have the tendency to cheat on their spouses, except those who are restricted by factors beyond their control.

The man, identified as Bongani Raymond, shared his opinion on Twitter while responding to a lady who said she would rather date several other men than forgive a cheater.

”I’d rather date the whole of SA than to forgive a cheater,” she tweeted.

In reaction to the lady’s tweet, Raymond asserted that all men cheat and any man who doesn’t cheat is either unemployed, has a physical disability, or locked up in jail.

”Is there a man out there who doesn’t cheat? Men who don’t cheat are either jobless, have a disability or in jail,” he responded.

See the tweets below: 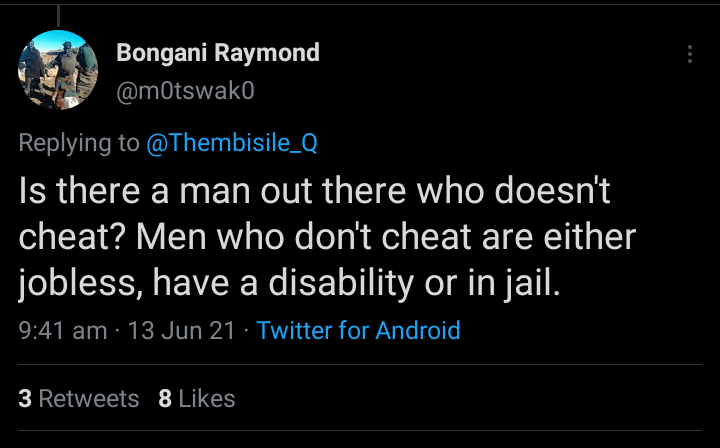 The proud father of two, Justice Ondaipe and his wife welcomed the set of twins, a boy and a girl after several years of waiting.

A close relative identified as, Faith Elvis Ovie on Facebook, shared the good news on the platform alongside photos of the couple and their twin babies.