Siege at Apple store as staff ‘held hostage by gunman’

Armed police rushed to an Apple store where staff were held hostage by a gunman and there had been reports of gunfire.

The incident took place in an Apple store in Amsterdam, Netherlands, and was caught on camera by several horrified onlookers.

In one part of one video, a suspect appeared to be holding a hostage at gunpoint as police frantically rushed around outside.

The gunman was seen in another video waving his firearm and kicking the window as he held the visibly distressed victim in a headlock-typed clinch. 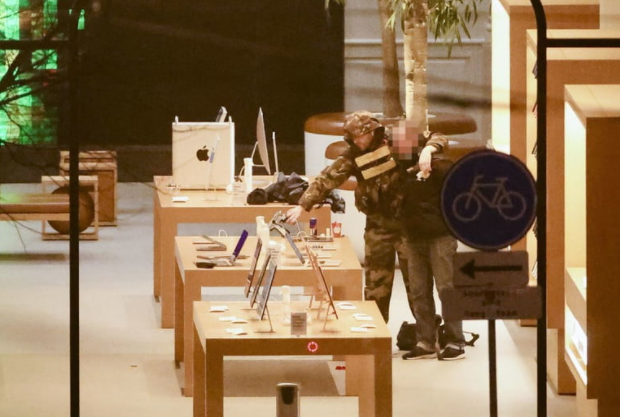 The suspect with his arm around the hostage

Amsterdam police have now confirmed that the situation is over and that the hostage is safe.

“We can confirm that the hostage taker is from the Apple Store. He is lying on the street and with a robot he is being examined for explosives. Police officers control him from a distance with firearms. The hostage is safe,” the police said. 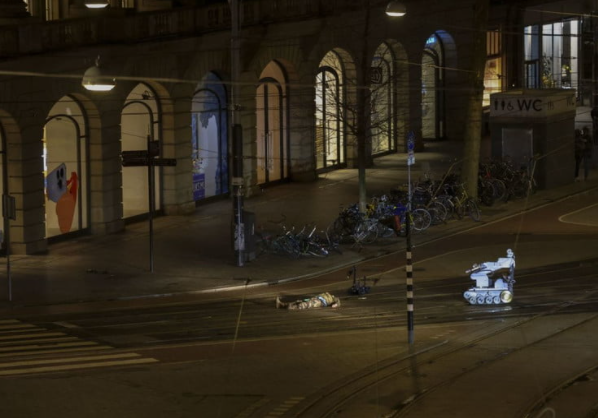 The suspect on the floor

According to reports, the hostage situation ended dramatically on Tuesday night, Feb. 22, when the suspect was hit by a police vehicle as he ran from the store in pursuit of a hostage.

The incident started at around 5:40 p.m. local time on Tuesday, February 22, when police received reports of gunshots at the store in the bustling Leidseplein district.

Some reports suggested the incident started as an armed robbery, with the suspect suddenly taking hostages when the cops showed up.

With police in position outside the store, all but one of the hostages managed to escape the siege in the hours that followed.

A photo from the scene shows the suspect — reported to be a 27-year-old man from outside the Netherlands — with his arm around the neck of the remaining hostage.

During the siege, the suspect contacted local news outlet AT5, demanding a cryptocurrency payment and safe passage from the store. He also sent selfies showing what appeared to be a bomb vest.

At around 10:45 p.m., some five hours after the incident started, the last hostage fled the store with the suspect in pursuit. Graphic footage captured by a witness shows a police car driving at high speed toward the man and knocking him to the ground. The hostage escaped unhurt.

With the suspect remaining down, police sent in a robot to find out if the bomb vest was genuine. After confirming it was fake, officers arrested the man before sending him to hospital.

It is believed no one else was hurt during the siege.