The surviving family members of Mr Ahmadi, who was killed by a US drone strike in August after US military intelligence mistakenly took him for an ISIS-K terrorist, say they want the Americans responsible for the tragic mistake  to be taken to court, while also asking for financial compensation and resettlement in the United States or another safe country for the rest of their lives.

Zemari Ahmadi, 43, was killed along with seven children and two adult family members. Before his death Ahmadi was an innocent aid worker that worked for a US company that.
provided protein nutrition to starving Aghan kids.

On Friday night, September 17, U.S. officials acknowledged he did not appear to be connected to ISIS-K terrorists. His fatal mistake, it appeared, was driving a white 1996 Toyota Corolla similar to one intelligence sources claimed was being driven by a known terrorist.

Speaking to the Washington Post, Ahmadi’s 24-year-old stepson Samim Ahmadi said that ‘the situation in Afghanistan is not good’.

He added: ‘Whether in America or another country, we want peace and comfort for our remaining years.

‘Everyone makes mistakes. The Americans cannot bring back our loved ones, but they can take us out of here.’

Ahmadi’s brother Emal, 32, who was just feet away from the remains of the car after the blast, said: ‘We didn’t have any money to bury our relatives. We had to borrow funds.’

And while he said he is ‘happy’ the Pentagon has acknowledged the miscalculations that led to his brother’s death, ‘forgiveness’ is too strong a word.

Family members said before the August 29 drone strike, Ahmadi and his brother had applications processing for special visas to enter the U.S. because of their work with American companies. 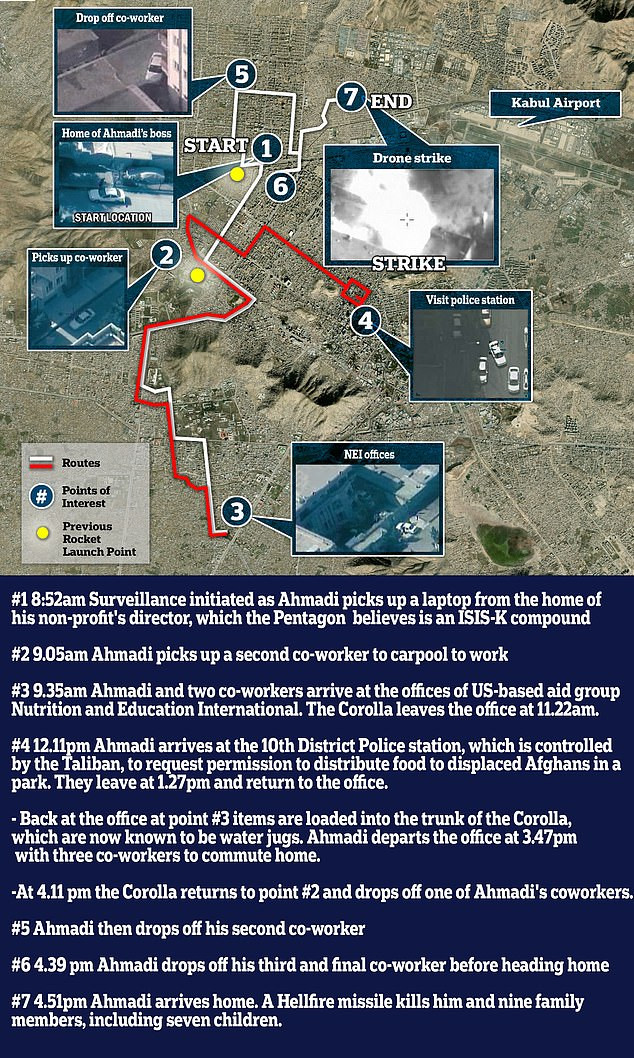 The fatal blast heightened the surviving family’s urgency to leave, according to The Post and Ajmal Ahmadi, another brother, said his family is ‘worried’ and ‘feels under threat because we are so exposed to the public by the media’.

‘Everyone got to know that we have worked for foreigners, served in the Afghan army as well as the Afghan intelligence agency,’ he added.

The Ahmadis also said the commander who oversaw the strike, the drone operator or anyone else who had visuals on the ground – need to be taken to court.

Emal said: ‘The US government must punish those who launched the drone strike. They knew and saw there were children on the ground. Can anyone bring them back?’