Prince Andrew, the third child of Queen Elizabeth II, has settled a civil sexual assault case brought against him in the US by Virginia Giuffre.

Ms Giuffre had been suing the Duke of York, claiming he sexually assaulted her on three occasions when she was 17, allegations he has repeatedly denied.

A letter filed to the US district court on Tuesday February 15, said the duke and Ms Giuffre had reached an out-of-court settlement.

It said the duke – who makes no admission of liability – would pay an undisclosed sum to Ms Giuffre.

In a letter to US judge Lewis A Kaplan, Ms Giuffre’s lawyer David Boies wrote jointly with Prince Andrew’s lawyers to say the pair had reached “a settlement in principle”.

A statement included with the letter read: “The parties will file a stipulated dismissal upon Ms Giuffre’s receipt of the settlement (the sum of which is not being disclosed).”

It said the duke would make a “substantial donation to Ms Giuffre’s charity in support of victims’ rights”.

Prince Andrew, the statement added, had “never intended to malign Ms Giuffre’s character” and he recognised she had “suffered both as an established victim of abuse and as a result of unfair public attacks”.

The duke also pledged to “demonstrate his regret for his association” with the late convicted sex offender Jeffrey Epstein by supporting the “fight against the evils of sex trafficking, and by supporting its victims”.

He also commended the “bravery of Ms Giuffre and other survivors in standing up for themselves and others”.

By avoiding a potentially explosive civil trial, it is hoped the out-of-court deal will stop the scandal causing even more damage to the Royal Family.

The Queen and Prince Charles put substantial pressure on Prince Andrew to settle his case with Virginia Giuffre, sources say

The Royal Family reportedly wanted a settlement agreed so the case did not overshadow the Queen’s Platinum Jubilee.

Before he settled out of court last night, Prince Andrew was set to be dealt a major blow in his US sex case thanks to Ghislaine Maxwell.

A leaked email from the Prince’s friend and now convicted sex trafficker appeared to confirm the authenticity of an infamous picture of the duke standing with his arm around his accuser, Virginia Roberts.

The photograph, said to be taken in Maxwell’s London townhouse in 2001, had been questioned by Andrew and just this week his legal team had demanded Miss Roberts turn over the original.

It was claimed that Miss Roberts had lost the original copy of the image.

The duke’s legal team had claimed it might be a fake, but an email obtained by the Daily Mail shows that even Maxwell, who appears in the background of the photo, believes it to be real. 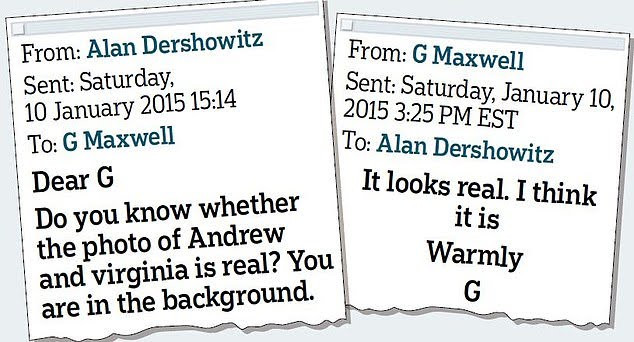