The Nigeria Police Force has withdrawn a case against the owner of Hotels and Resorts, Ile-Ife, Rahmon Adedoyin, and six others charged with the murder of Timothy Adegoke, a Masters degree student of the Obafemi Awolowo University who died at the hotel on November 6, 2021.

The deceased resided in Abuja but traveled to Ile Ife for his examination and lodged at the hotel where he allegedly died and was subsequently buried by the hotel management in a shallow grave without the knowledge of his family or the police.

In an application filed at an Abuja High Court on Monday, the police said it wishes to discontinue all proceedings in the murder case so as to allow it carry out “further investigation”.

Others charged with the educationist are Adedeji Adesola, 23; Magdalene Chiefuna, 24; Adeniyi Aderogba, 37; Oluwale Lawrence, 37; Oyetunde Kazeem, 38; Adebayo Kunle, 35, and others still at large.

The police had moved Adedoyin and the six others from Osun State to Abuja for investigation and prosecution.

According to the case summary and proof of evidence earlier filed by the police, Adedoyin is being charged with illegally disposing of Adegoke’s body, altering and cancelling his payment receipt and removal of the hotel’s CCTV cameras with intent to destroy evidence.

But in a ‘Notice of Discontinuation of Charge No.CR/015/2022 brought pursuant to Section 108 of Administration of Criminal Act 2015’, on February 7, 2022, the police told the court to discontinue the matter.

“Take notice that the complainant discontinue all of the proceedings in this case against the above named defendants for further investigation,” said Ochogwu Ogbeh of the Legal and Prosecution Section of the Force Criminal Investigation Department, Abuja. 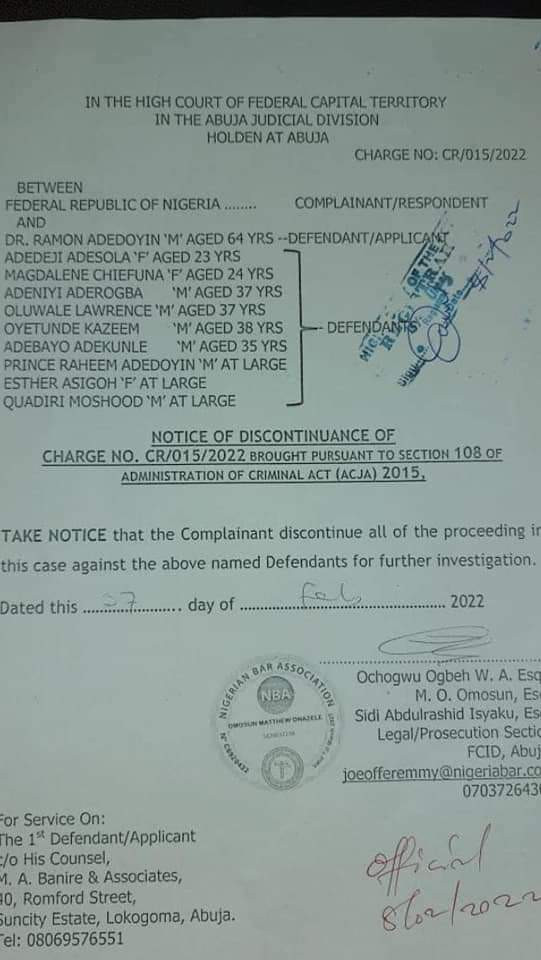 The presiding judge, Justice Module Adebiyi, subsequently struck out the case against Adegoke and others.

Meanwhile, human rights lawyer, Femi Falana, who is counsel to the Adegoke family, had asked the Inspector-General of Police, Usman Baba, to transfer the suspects from the Abuja court to a competent court in Osun State since the crime was committed in Osun state.