‘Nnamdi Kanu was paraded like a criminal on the same day he was illegally kidnapped from Kenya. Where is Abba Kyari? Let us see him paraded like the criminal he is’ – Reno Omokri

Reno Omokri has tackled the Nigerian authorities for failing to parade arrested suspended DCP, Abba Kyari, who was last week arrested for his alleged involvement in drug trafficking.

In a post shared on his Instagram page this afternoon, Reno opined that Nnamdi Kanu was paraded like a common criminal after he was brought to Nigeria from Kenya last year. He insisted that Kyari should also be paraded as well.

”Almost a week after Abba Kyari was exposed as a drug baron, he has not been paraded by NDLEA, EFCC, or the Police. Meanwhile, the NDLEA immediately paraded a young boy caught with marijuana. Marijuana! You have someone involved in importing billions worth of hard drugs, and it is the marijuana teenager that you are arresting? If we test General Buhari’s urine, do you know what substances we will find?

Even in crime, Nigeria still applies quotas system to favour certain people! A freedom fighter, Nnamdi Kanu, was paraded like a common criminal on the same day he was illegally kidnapped from Kenya and brought to Nigeria. Where is Abba Kyari? Let us see him paraded like the criminal he is!” 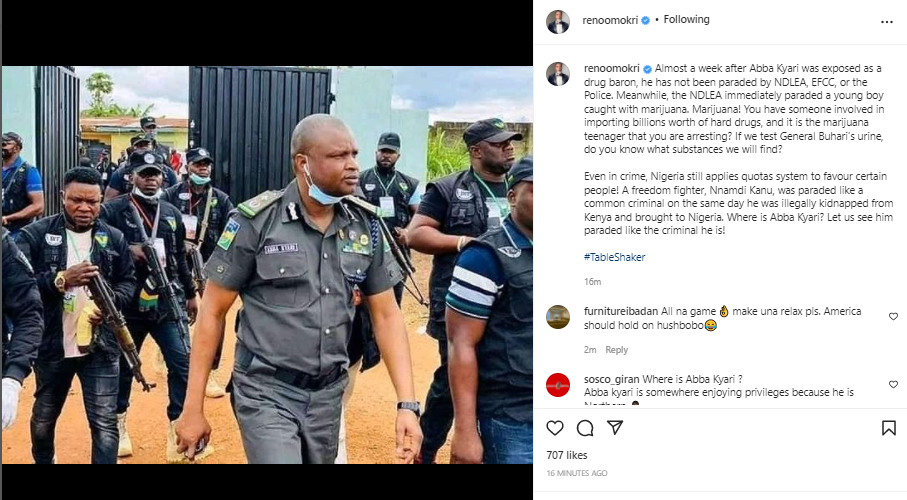