by Sandra Idubor
in News
Reading Time: 2 mins read
A A
0

Newlywed Johannesburg couple, Zaheer Sarang and Nabeelah Khan were reportedly electrocuted to death on Sunday June 13th, a day after they returned home from their honeymoon.

Johannesburg police spokesperson Captain Mavela Masondo who confirmed the incident said the couple’s bodies were found in the shower on Sunday afternoon.

“It is suspected that the couple were electrocuted. Police are still waiting for the post-mortem results that will confirm the cause of death.”He said.

“The problem is that there are many other residents from Homestead Park, Mayfair South that are also experiencing this shocking when they touch the taps at their house. It does seem to be a bigger problem in terms of what is going on.”

Friends and families has since taken to social media to mourn the couple. A Facebook user, Mehreen Mia Cassimjee wrote,

“I am. Shocked.. Devastated.. Just recvd the news of the passing of both our Br Zaheer Sarang and his wife Nabeelah as well (married two weeks ago ??)

Allah grant the Marhoomeen Jannatul Firdaus inshaaAllah and strength to all at this difficult time
?????? This is truly tragic and a huge loss ??????”. 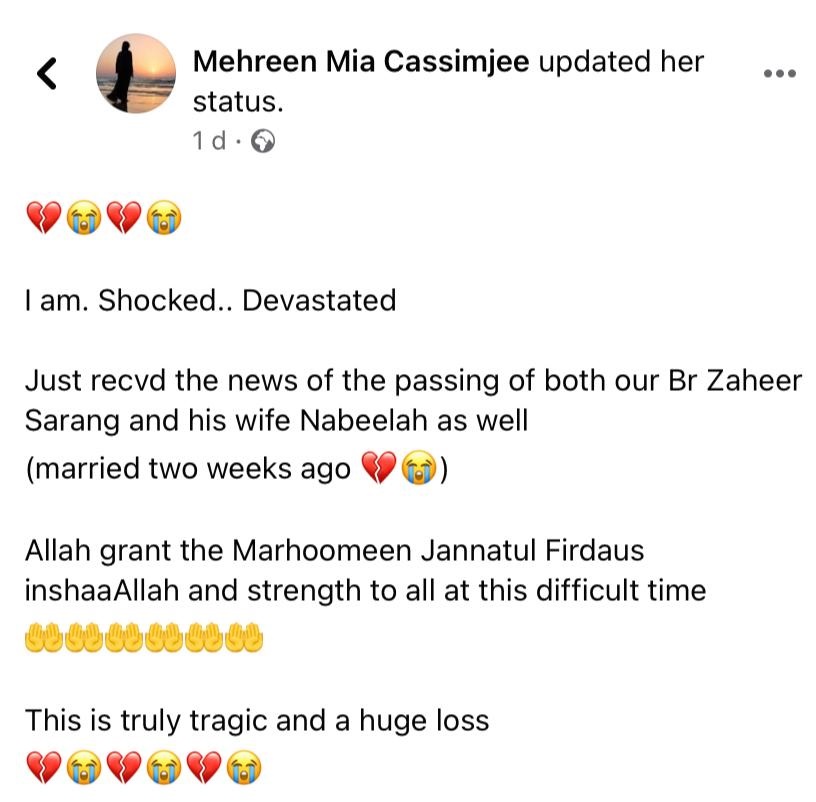