“Most ‘miracles’ you see on TV or crusades are staged” – Fr. Kelvin Ugwu

Nigerian Catholic priest, Fr. Kelvin Ugwu, has averred that almost all miracles people see on television or in crusades are staged.

The priest stated this in a Facebook post on Thursday, February 3 while speaking on some of the signs to identify real miracles.

According to him, the first sign that a minister is fake is when he is being advertised ahead of a church program as a healer. He noted that anyone who truly has the gift of healing does not make a noise about it and won’t be comfortable when it is used.

He went on to state that almost all the so-called miracles people see on TV or in crusades are staged.

Miracles
Few points to note:
1. It is a sign that the minister is fake when he is being advertised ahead of a church program as a healer. Anyone who truly has the gift of healing does not make noise about it and won’t be comfortable when it is used for an advert to pull crowd or to make him or her famous.

2. The “testimonies” you read at the back of a church flyer whenever they want to advertise a crusade or a program are often half-truths and concocted lies. Someone will tell you how she has been barren for 10 years and miraculously conceived and gave birth to twins after the “man of God” laid hands on her stomach, yet, just a little investigation into the case and you will discover that the woman did IVF. Why was that part of the story hidden?

3. Almost all the so-called miracles you see on TV or crusades are staged. Some are more of psychological manipulations than a miracle.

4. In the Catholic Church, for anything to pass as a TRUE miracle, it must be open to a third-party investigation. The third-party must be an independent person who plays the devil’s advocate.

5. You do not claim that a miracle has happened because someone stood up from a wheelchair in your “Three-day power-packed Miracle Signs and Wonders Revival with the anointed Prophet Dr. Evang Tom-Tom Chewing-gum.”

The ordinary questions should be:
Who is the person?
Where is the person coming from?
What is the medical condition as presented by a doctor?
Has it been concluded by experts and did they do a proper diagnosis prior to the miracle that it will be medically impossible for the person to walk again?
Asking those questions does not make you an unbeliever. Our faith is what St Anselm describe as Fides quaerens intellectum (faith seeking understanding). 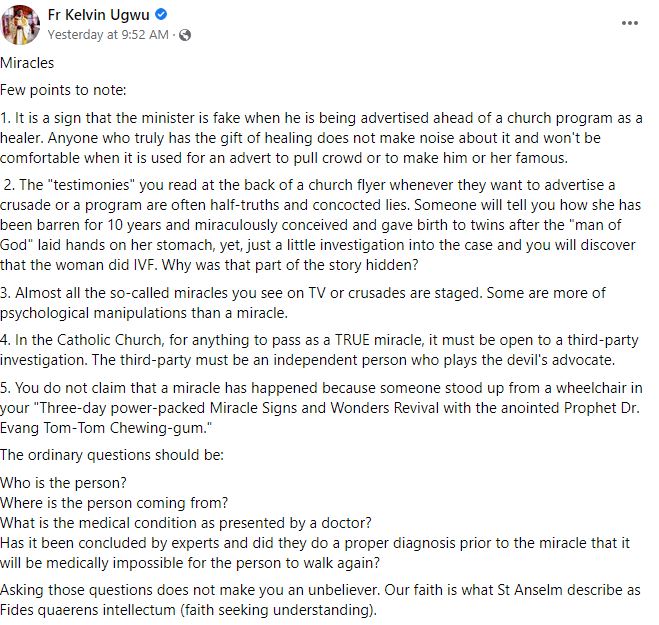