A call girl has blasted a ‘sex addict’ man after he dumped her in a car park without paying his £720 bill and didn’t even offer to make her a cup of tea when she came to his place.

Matthew Bushell, 48, was jailed for two years on Monday, December 20 after he placed adverts for topless cleaners online, breaching a court order.

The order was made after he invited women to his home for “job interviews” and groped them and sucked their fingers, Liverpool Echo reports. 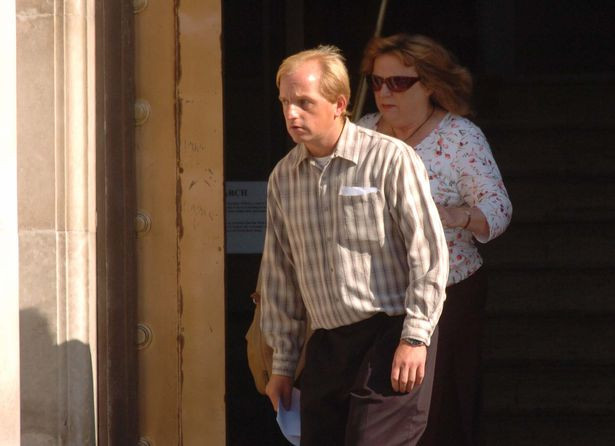 The court heard that Bushell (pictured above with a female friend in court) has a long history of ‘using’ prostitutes even reporting his “dissatisfaction with their services” to the police.

The man first appeared in court in August 2006 after an escort had called the police when Bushell ditched her in a car park without paying for her services.

The escort later complained to the newspaper that “he didn’t even make me a cup of tea” even though she asked for one twice.

Bushell, who has no job, and is now 48 years old, told the escort he couldn’t afford the bill for their six hours together because his obsession with escorts had left him bankrupt, after paying out £15,000 over two years.

The woman, who was 37 at the time, travelled from Bradford, West Yorkshire, to his home in Southport, Merseyside, after the pair settled on a fee of £120 per hour for her sex time.

Bushell took her back to his home for sex, promising to pay her later – but ended up leaving her empty-handed in a car park.

Later, he sent her a text saying: “Sorry. Had to do it. Did not have a penny at the time. Hope you got home safely.”

The escort reported to the police, and Bushell was charged with ‘dishonestly obtaining services’.

Bushell’s defence lawyer said he was obsessed with sex and knew he should have paid the woman.

He said his parents explained he was “socially lacking in skills” and they were “at the end of their tether”.

The escort said at the time: “From the start my experience was quite odd because he lied about where he lived, so we had to drive for about an hour until we got to his house.

“I thought it would be going out to dinners and events and maybe a bit glamorous. But Bushell didn’t even make me a cup of tea, even though I asked him twice.

“He told me to wait in the pub and he sped off like a mad man.

“I was on my own, somewhere I didn’t know and had no money and no credit on my phone – the only thing I thought was to go to the police.”

Judge Stuart Driver QC on Monday said it was a “persistent and deliberate breach” as he jailed him for two years.

He has previously been convicted of two sexual assaults and harassment against a female doctor.