A man has been abducted and two of his aides killed after unknown gunmen attacked his vehicle while entering his house in Auchi, Edo state.

Nigerian lawyer, Abdul Mahmud, who shared the story online, said the victim is his brother-in-law.

Posting a video showing the security aide after they were killed, Abdul wrote;

”I’ve been screaming about insecurity in our country. Spoken about it on TV and on spaces here. Today, I called a friend to rejoice with him on the release of his brother by kidnappers. This evening, my brother inlaw was kidnapped. His driver and security personnel killed.

Ordinary citizens are increasingly becoming the victims of our irresponsible state. Saturday, we spoke about this when I called to commiserate with him on the death of his uncle. He told me that Etsako is facing a trio of evil: (1) Bandits (2) kidnappers; (3) Yahoo ritualists

Sad, he has become a victim of the insecurity in our country. While we are doing all we can to secure his freedom and the freedoms of those taken with him, we ask for your prayer.”

Watch a video from the scene below

This is the State of the Nation. A private citizen accosted at the gates of his home, taken away; his driver and security aides brutally and tragically put down. And people say I shouldn’t speak about this “anthropocene” of violence in my country pic.twitter.com/0pENjSI8iI 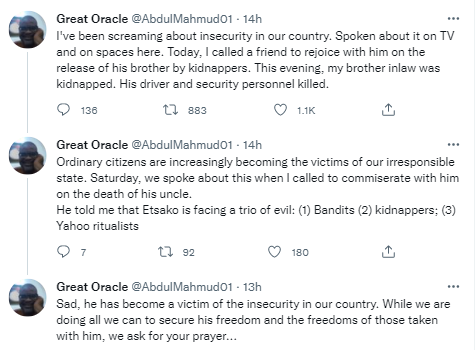 The police complaint unit has acknowledged the report and says an investigation has commenced. 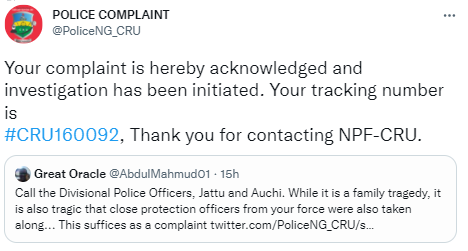