by Sandra Idubor
in Browse
Reading Time: 2 mins read
A A
0

A Nigerian Facebook user has narrated how the money she was saving up in a wooden piggy bank mysteriously disappeared.

Olori World best revealed that she got the piggy bank after she made up her mind to start saving up for “detty December”.

The Facebook user said she had her fears but overcame it and started putting in N1k daily from early August till early September, and also had a record for it. The lady who said she stopped recording when the money got above N21k, said she found only N6k when she broke the box for a need of N20k.

Disclosing that she lives alone and also sure no one removed it, Olori stated that she has been hearing of people’s money disappearing from their piggy bank and just experienced it.

I was feeling somehow when I wanted to buy this piggy bank from the woman I bought it from at dopemu but becos I wanted it badly I bought it and left,I left it athome for months cos of my fears but I make up my mind early August to start putting money in it for detty December,I started putting 1k daily till early September Nd I was even jotting it down sef but I stopped jotting when the money was upto 21k , I continued putting money in it till early this month Nd then stopped only for me to break it this morning cos I needed urgent 20k Nd found 6k out of almost 30k plus

How come?? I don’t know too. I live alone so I’m sure no one removed it

E pain me oo I no go lie, but I’m sharing this cos this is the season most people buy piggy bank to save there money for December,pls be extremely careful when buying Nd always follow your mind.my mind wasn’t true with the piggy bank from the start but Na me no hear word. Naso I lost 24k plus sha..Olorun Ari Ejo Da o

Na only ear I Dey take hear say this things dey happen but e never happen to me or anyone close to me. I still Dey check the piggy bank boya the money fit show but e don pass 1hour now which means say na OYO I Dey Na wetin make me make this post be that.. 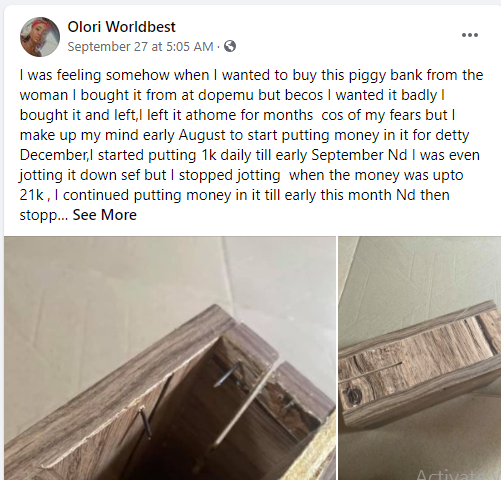 I’m in court to save PDP from hirelings – Secondus