A shattering watchdog report exposed how Met police officers joked about “raping” and “hate-f***ing” female colleagues, “killing black children”, and beating their partners in a series of WhatsApp messages.

The messages were uncovered by the Independent Office for Police Conduct.

Despite the damning evidence, nine of the 14 officers investigated are still serving in the force – with just two sacked – prompting critics to accuse the Met’s leadership of failing to root out a harmful culture.

The highly critical report is just the latest scandal under the watch of Commissioner of Police of the Metropolis Dame Cressida Dick.

Today, there was a chorus of calls for Dame Cressida to resign or be sacked after the report was released. 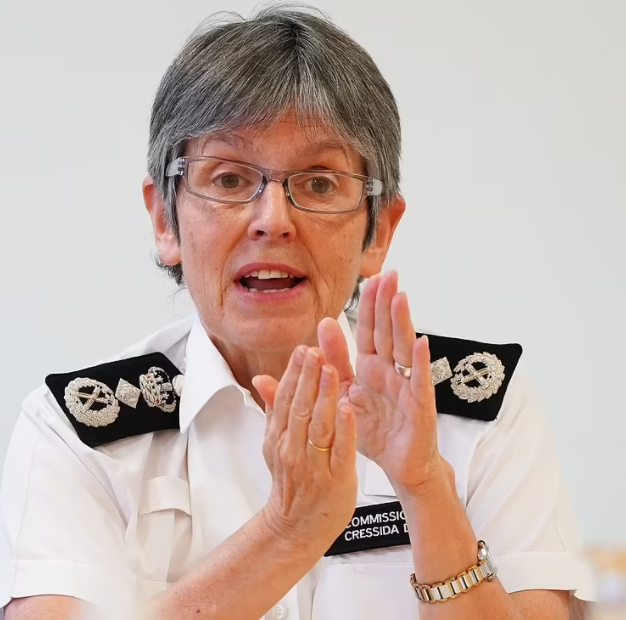 Investigations found evidence of “toxic masculinity, misogyny and sexual harassment” and the victims who complained of their behaviour were told it was just “banter”.

A chat between two male officers shows one officer telling his colleague that his wife is driving him “mad” and he wants his colleague to “come and shag a baby into her” to “shut her up.”

The same officer also joked about raping a woman at knifepoint as he wrote: “Getting a woman to bed is like spreading butter. It can be done with a bit of effort using a credit card, but it’s quicker ad easier just to use a knife.” 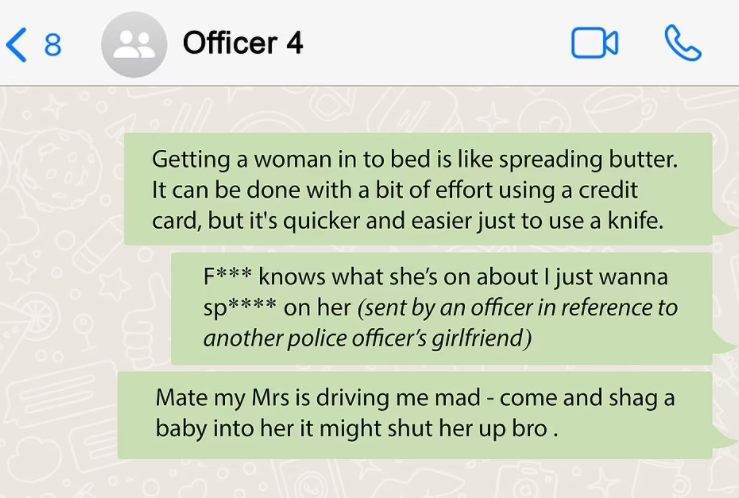 Today’s report revealed that the police officers would tell disgusting jokes about raping women and each other.

The policemen sent a plethora of messages about beating up wives and girlfriends to make them love them more, and forcing them to have sex to “shut them up”.

One officer wrote: “I f***ing need to take my bird (woman) out, won’t see her until next Saturday. Then I have to work. Promised to take her out the Friday after. Making it up to her from when I backhanded her.”

A second officer then replied: “Grab her by the p***y”

But the first officer continued: “You ever slapped your missus?

“It makes them love you more. Seriously since I did that she won’t leave me alone. Now I know why these daft c**ts are getting murdered by their s****** boyfriends. Knock a bird about and she will love you. Human nature. They are biologically programmed to like that s***.” 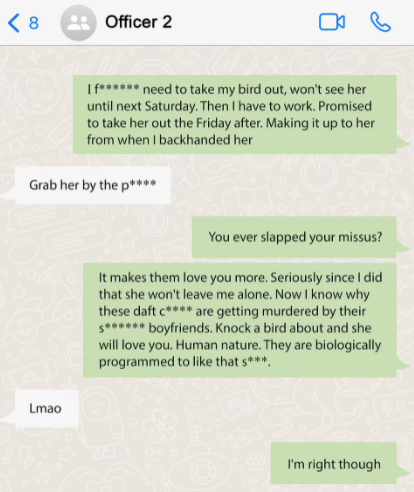 One officer also spoke of his intention to beat his woman and another officer encouraged him to do it then deny.

One officer wrote: “And my bird won’t stop taking the p**s. Swear to got [sic] I’m going to smack her.”

Another police officer responded: “Slap her one…say you didn’t.”

Police officers who gave evidence spoke of dominant macho officers, bragging about sexual activity, encouraging each other to “slap women”. 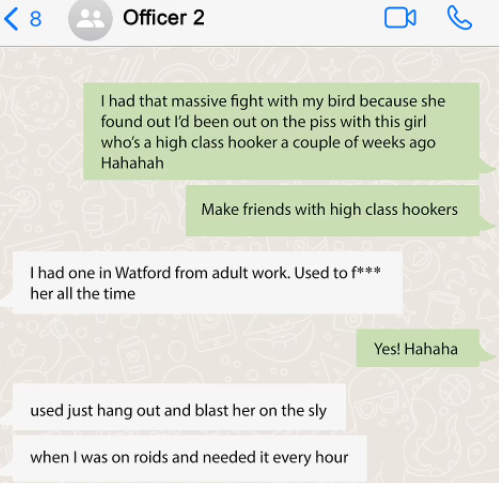 One officer’s aggressive behaviour towards women was considered so suspect that he was known as “Mcrapey Raperson”. It was said that he would chase and harass women and women had to be careful when he was around.

Asked why the officer at Charing Cross Police Station was called “Mcrapey Raperson”, a colleague said it related to “harassing them [women], getting on them, do you know what I mean being like, just a d***”.

The Met officers also joked about black people being robbers, Africans being “made into dog food”, Somalian “rats” and even the Holocaust.

Many of the messages were sent at the time when the Black Lives Matter movement came to prominence around the globe in 2020.

In one WhatsApp group, a policeman said: “My dad kidnapped some African children and used them to make dog food”.

Another wrote: “Some uniform or plain clothes work on Somalian rats… I battered one the other day…weighed less than [police officer’s name].”

A police officer sent another officer an image of a Black man wearing a white shirt and he wrote: “Ignore the robber…I like the shirt.”

In one Anti-Semitic message joking about the killing of Jews, one officer said: “Opened my balcony door and loads of flies flew into the front room. So I got the fly spray and turned my gaff into Auschwitz.”

The officers also used abhorrent language to describe people with disabilities, including calling them “spastics” and one a “retard”.

The messages were uncovered as part of nine linked investigations into officers based in Westminster, mostly at Charing Cross police station, which began in March 2018 after allegations that a male officer had sex with a drunk woman at a police station.