It was reported earlier that Baba Suwe passed on Monday, after a long battle with illness.

The news of his death has since generated reactions as most Nigerian celebrated him for bringing joy to their home with his acting back in the days.

Confirming his death, Mr Latin, the president of the Theatre Arts and Motion Picture Producers Association of Nigeria, in a chat with PUNCH said

In a post shared on the microblogging platform, Damson Idris penned down a tribute for Baba Suwe, describing him as an icon who first taught him comedy. 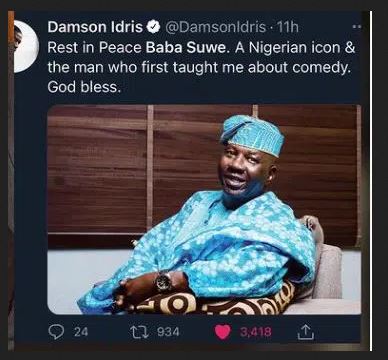