The family members of a man grieving the death of his wife have cried out over the arrest of the widower and the sister of the late wife.

Jude Osuhor, from Umunede, Delta State, lost his wife Vivian Osuhor (nee Efifie), 35, from Agulu, Anambra state, on September 14, 2021. She died in a hospital in Lagos and the autopsy carried out on her said she died from complications that she developed from the miscarriage of an eight weeks pregnancy.

A medical report issued by Dr Oyetunde Oyeyinka revealed that Vivian suffered from Fibroid Menorrhagia, Septicemia and Diabetic Ketoacidosis which resulted in complications that eventually took her life.

However, Vivian’s youngest sister, Loveth Efifie, did not agree with the autopsy report and she reported to the police that her sister’s husband had killed her sister. She also roped in her blood sister, Happiness Efifie, who lived with the deceased before her death. 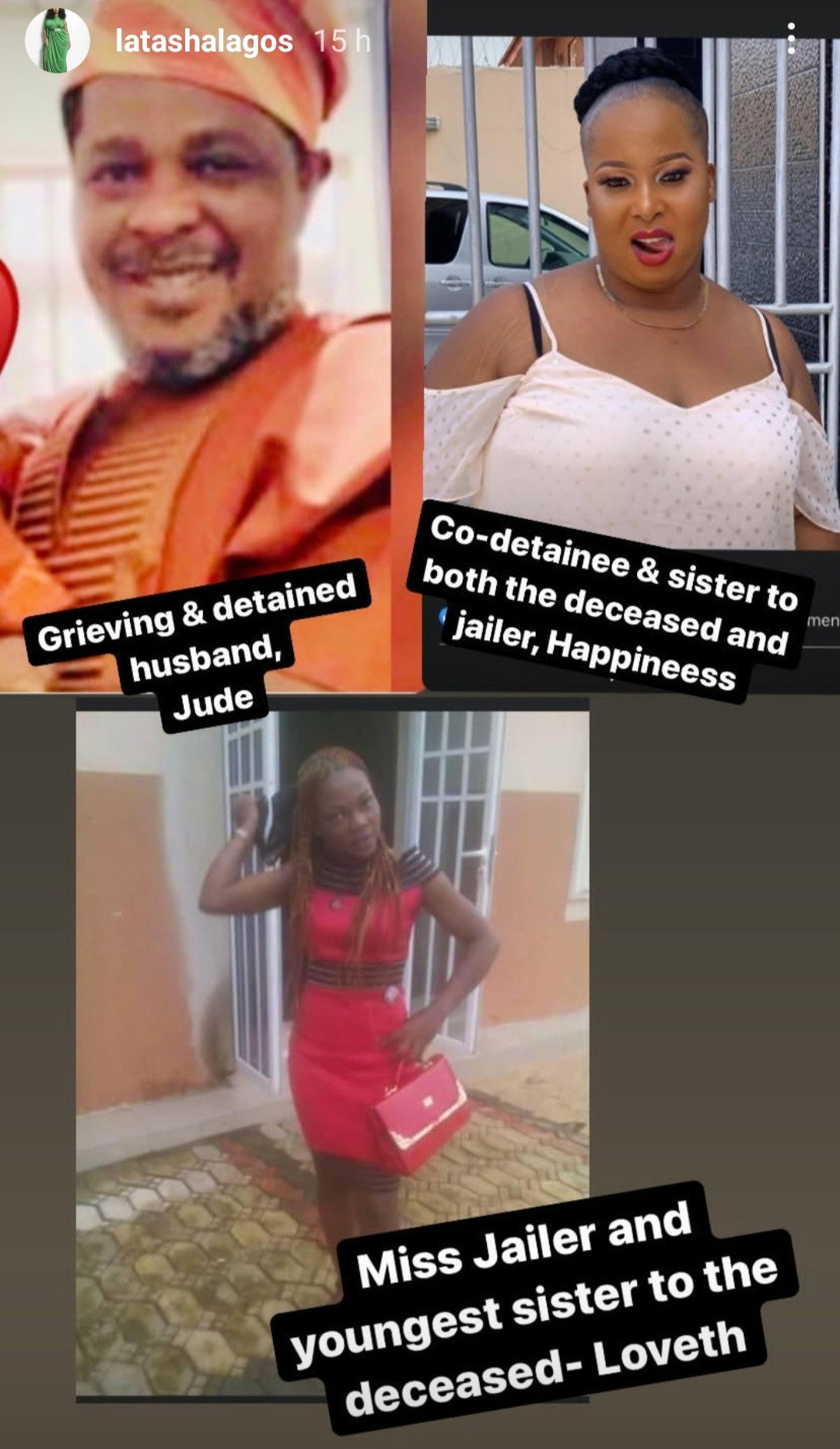 Jude Osuhor and his late wife’s sister, Happiness, were arrested by police after the deceased’s younger sister reported to the police.

The duo were reportedly transferred from Lagos to Abuja on October 4, 2021, where they were granted bail after the investigation by the police failed to reveal a concrete reason for their continued detention.

But after their return to Lagos following the bail, the duo were said to have been invited by the police in Abuja who paid for their one-way Air Peace tickets for “a chat” with DIG Joseph Egbunike of FCIID on October 15.

Since then, they have reportedly remained in police custody.

Family members of Jude have called on the police to obey court orders by releasing the two persons in their custody.

Jude’s sister, Ifeoma went on Facebook to reveal that her brother’s wife died in the hospital while they were all praying for her survival and watching her in the hospital through WhatsApp video.

She questioned what motive her brother would have to kill his wife when it was clear that he and their two children – a 14-month-old and a 6-year-old – would be lost without her.

She said her brother has not been allowed to properly mourn his wife as he’s been in police custody. 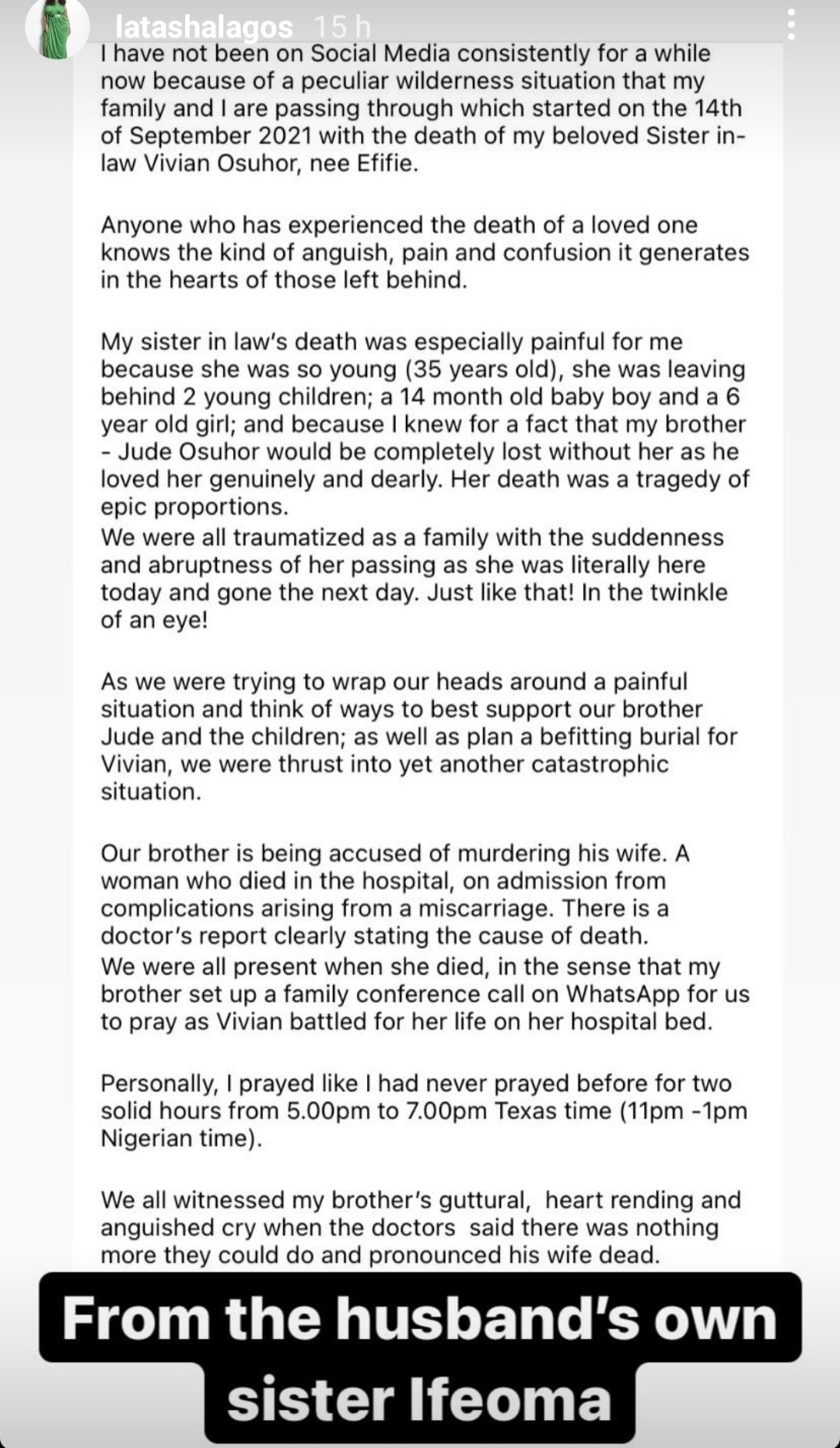 Family members of Jude Osuhor have released a statement that partly reads: “Jude Osuhor and Happiness Efifie were arrested in Lagos on October 2, 2021, by members of the Nigeria Police Force from the FCID in Abuja, on trumped-up allegation of the ‘murder’ of Jude’s 35-year-old wife, Mrs. Vivian Osuhor (nee Efifie), on the instigation of the deceased’s youngest sister, Loveth Efifie, despite a medical report and death certificate issued by Dr Oyetunde Oyeyinka of Healing Field Specialist Clinics, Ajao Estate, Lagos, stating that Vivian died of Fibroid Menorrhagia, Septicemia and Diabetic Ketoacidosis on 14th September, following complications from the miscarriage of her 8 weeks pregnancy.

“Happiness, the immediate younger sister of the deceased, had lived with her late sister and her husband (Jude) for years in their Lagos home.”

It continued, “Upon arrest in Lagos, Jude and Happiness were transferred from Lagos to Abuja on October 4 and were initially granted bail on October 5 as police investigation did not reveal any reasonable cause for their continued detention.

“After their return to Lagos following the bail, they were re-invited by the police to Abuja who paid for their one-way Air Peace tickets for ‘a chat’ with DIG Joseph Egbunike of FCIID on October 15 and have remained in police custody since then, despite an autopsy revealing that Vivian was not murdered by her husband or immediate younger sister, another round of police investigation revealing nothing new on the accusations, and two Federal High Court orders secured by their counsel, J. S. Okutepa SAN, for their immediate release.

“The frivolous petition by Loveth had prevented the burial of the deceased mother of two, initially fixed for October 7 in Delta State by both her family of Agulu, Anambra State and her in-laws of Umunede, Delta State, and forcing her corpse to be brought from Lagos to Abuja for autopsy.

“Even the initial conclusion and advice of the police investigating team that the matter was a family feud that should be settled amicably between the Efifie siblings was ignored by Loveth, who has allegedly insisted on the prosecution of the detainees in order to take custody of the two little children of the deceased, and as a result of her political connections and familiarity with people in high places, including a former head of state.

“The Efifie family of Agulu, Anambra State, had written two complaints to the Inspector General of Police over the continued illegal detention of their daughter and son-in-law on the instigation of Loveth, adding that she be investigated over the death of her late sister rather than acceding to her baseless petition. Unfortunately, the IGP has failed to act in consonance with the family’s request.”

A number of prominent Nigerians have lent their voices to call for the release for the bereaved widower and his sister-in-law. 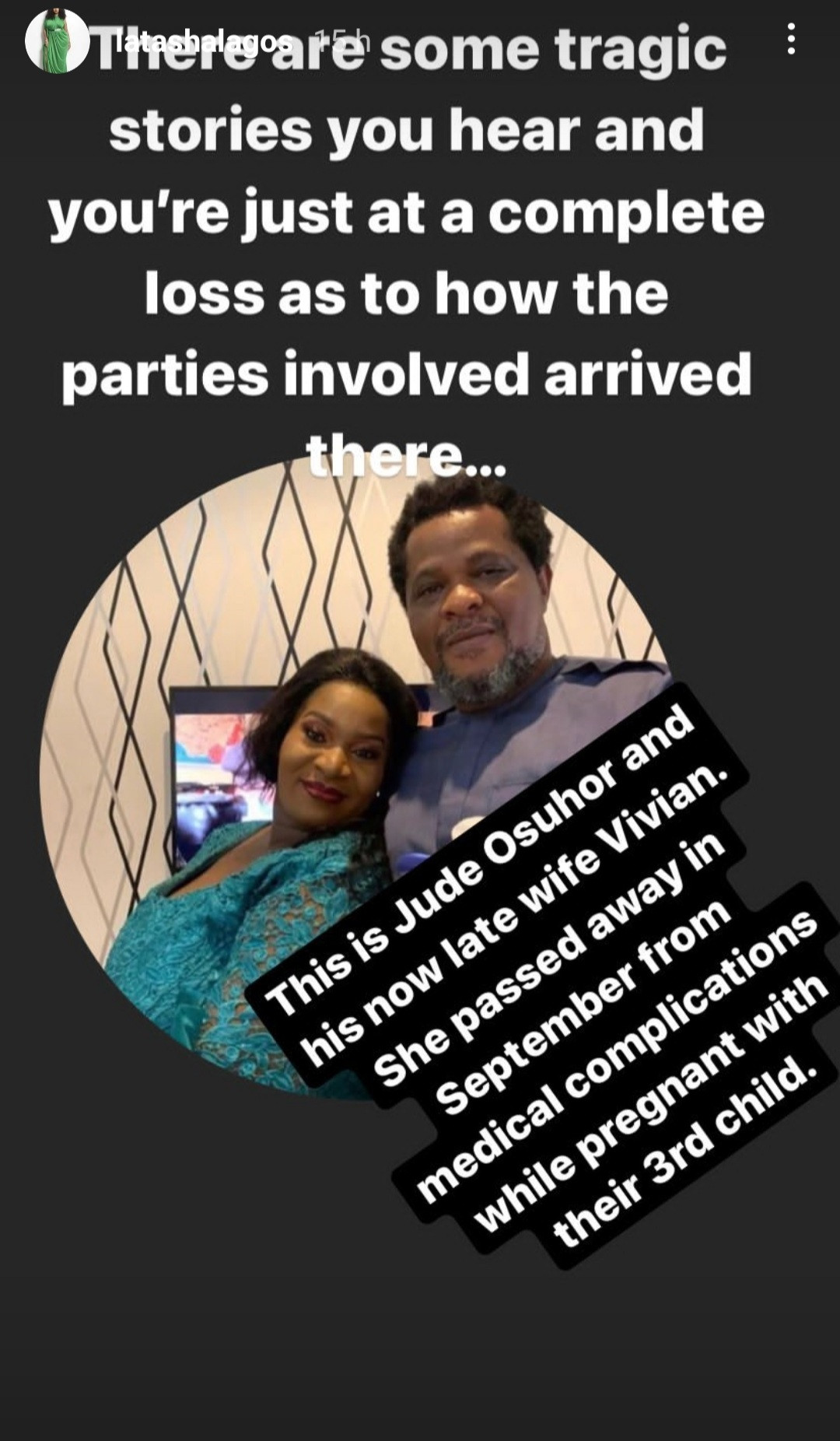 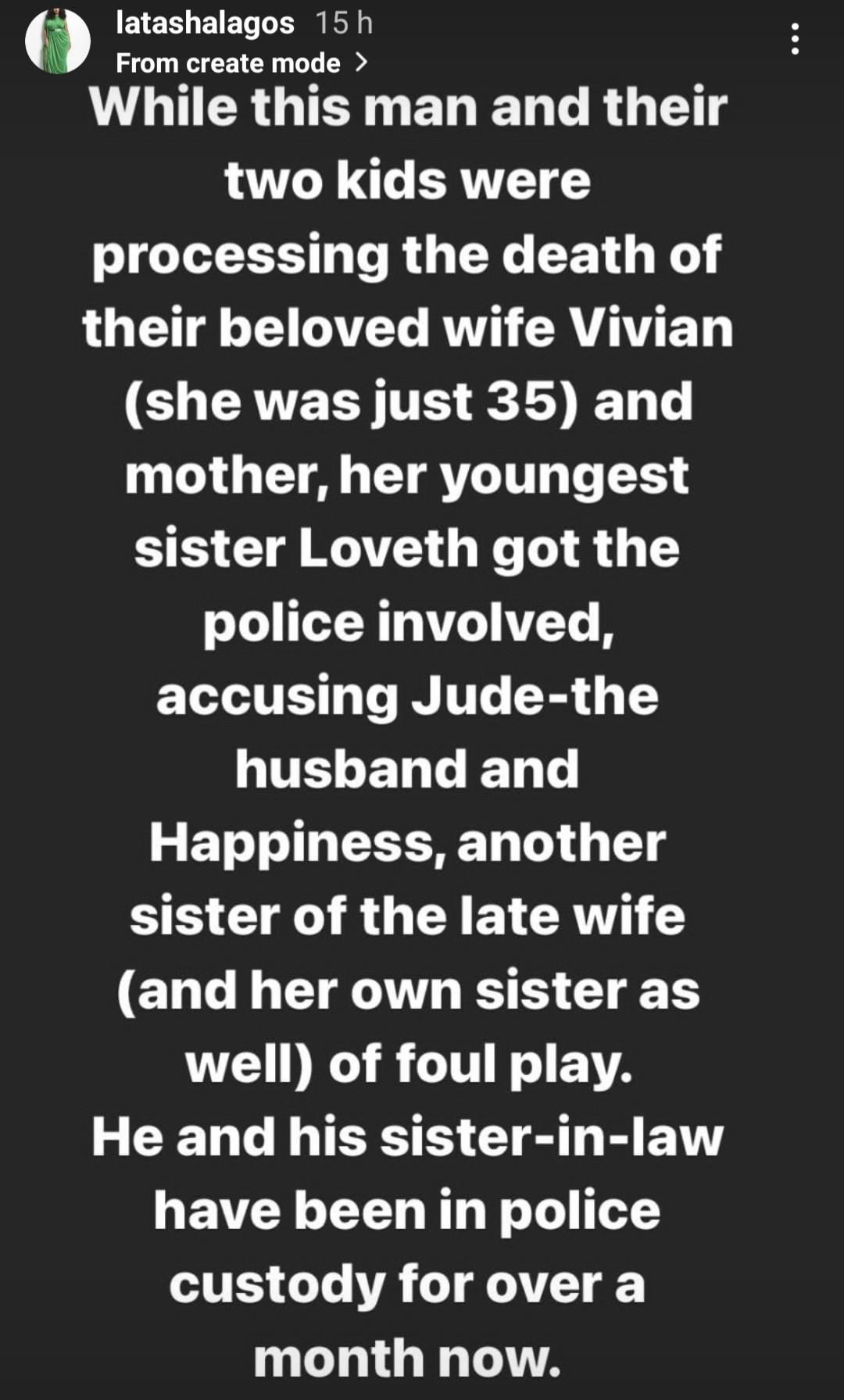 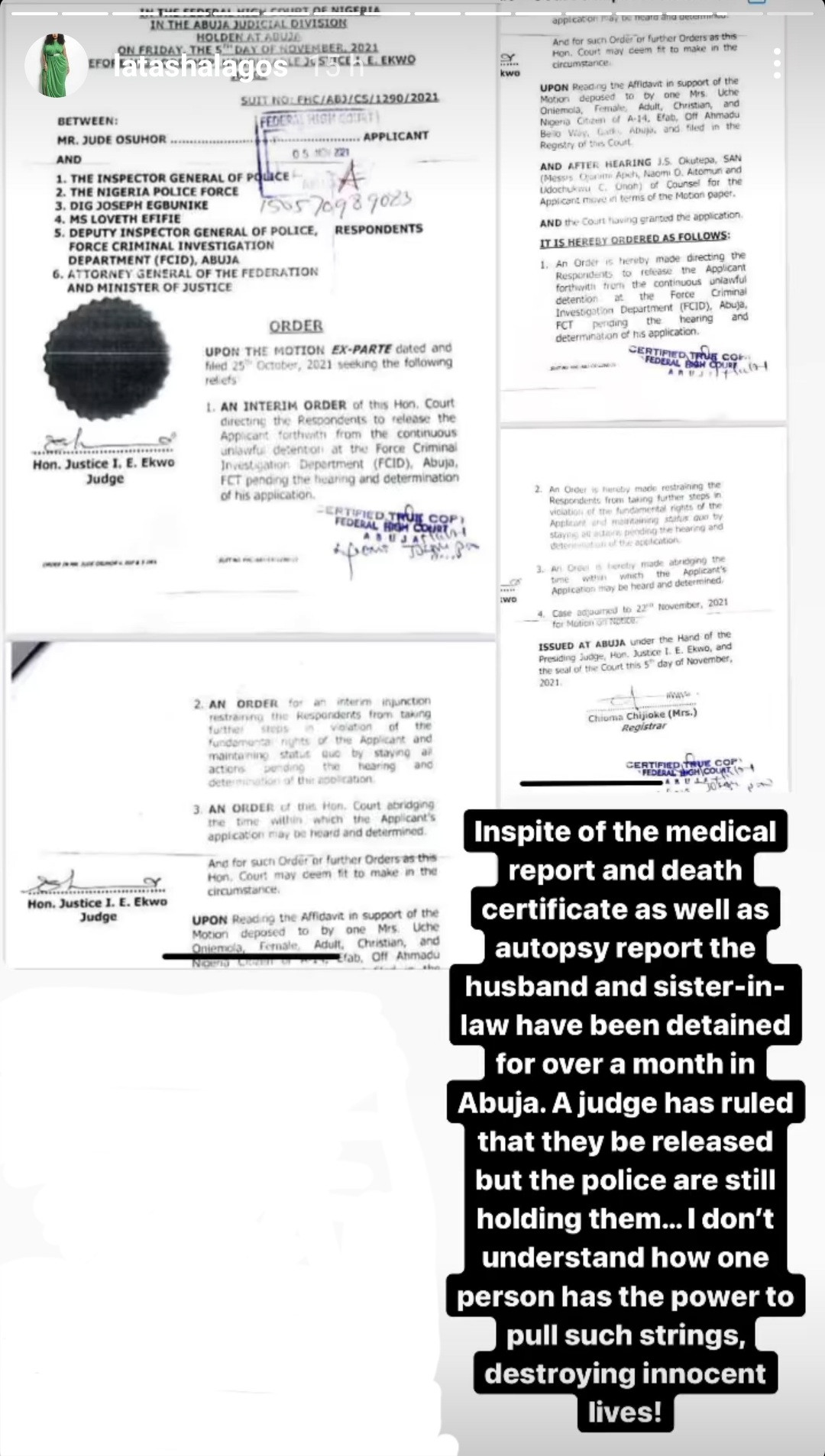