Donald Trump has announced that his new anti-censorship social-media site has attracted a further $1 billion in investments.

Making the announcement of the cash injected into his upcoming site TRUTH Social, Trump said: ‘$1bn sends an important message to Big Tech that censorship and political discrimination must end.

‘As our balance sheet expands, Trump Media & Technology Group will be in a stronger position to fight back against the tyranny of Big Tech.’

The 45th President of the United States previously explained that his plan for TRUTH was to allow users to post ‘without discrimination on the basis of political ideology’.

The capital raise highlighted the former US president’s ability to attract strong financial backing seizing on his personal and political brand.

Trump is working to launch  TRUTH Social during the first quarter of 2022.

The former President, who has hinted he might seek reelection in 2024, said TRUTH Social will be an alternative to Silicon Valley internet companies that ‘are biased against him and other conservative voices.’

The 75-year-old  was banned from Twitter, Facebook, and YouTube after the January 6 insurrection in which a mob of Trump supporters attacked the US Capitol over his repeated false claims that the November 2020 election was stolen from him. 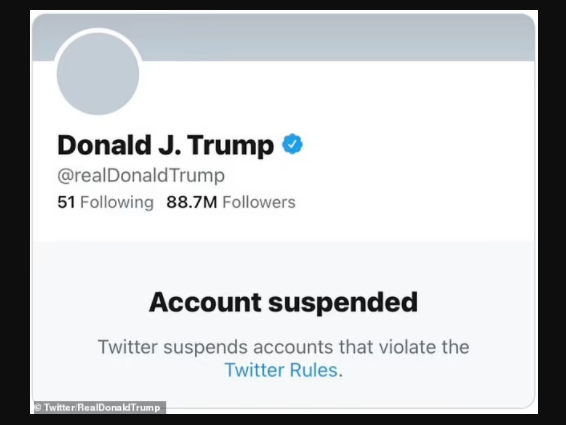 TRUTH Social is the first of three stages in the Trump Media plan, followed by a subscription video-on-demand service called TMTG+ that will feature entertainment, news, and podcasts, according to the news release.

The $1 billion sum would be in addition to $293 million that Digital World Acquisition Corp raised in an initial public offering in September, taking the total proceeds for TRUTH to about $1.25 billion.

EFCC docks woman, one other for fraud in Makurdi

US Senate candidate smokes marijuana in his electoral campaign ad

If you fail to get PVC your fate, overall wellbeing will be determined by poorly educated and illiterate members of the society – Bauchi Governor’s son warns