A father was thrown out of a school board meeting earlier this week after refusing to wear a mask.

On Tuesday night, February 8, the man identified as Dave Calus was sitting in a chair watching a presentation at a board of education meeting in Webster, New York, when a security guard approached him and asked him to put on a mask.

Calus said he told the guard “Thank you,” but refused to cover up. The officer persisted, saying “No, you need to put your mask on right now.”

The security guard then dragged Calus’ chair towards the back of the room. A video posted to the Facebook page ROC for Educational Freedom Public Page shows when Calus turned around to confront the security guard, the guard pushed him out of a back door. 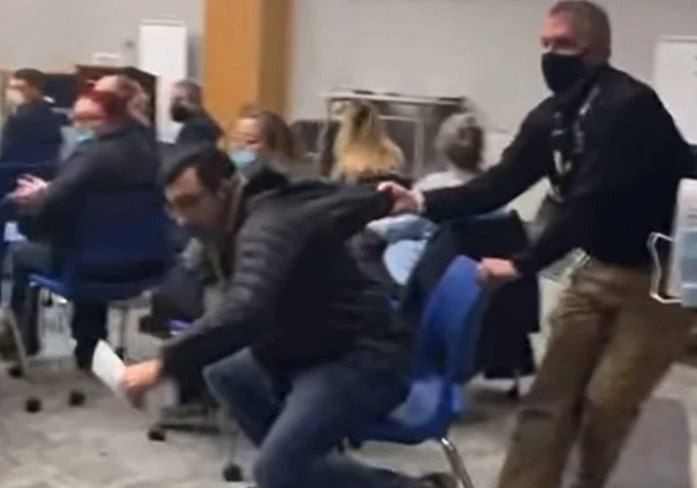 Explaining what transpired, the father of two, on Kimberly’s Revolution podcast, said,

“I went into the building without a mask on. I signed in and they said ‘you need to wear a mask.’ I said ‘thank you. I signed in, they handed me a mask – I did not put the mask on – and I put it in my pocket.”

“They were segregating masked and unmasked parents,” he explained. “The unmasked parents were going to have to sit in a classroom with a video monitoring watching and listening to the board meeting.”

He said he was sitting for about 15 or 20 minutes before the guard approached him. He was not surprised that the guard confronted him, as he had heard him approach other mask-less parents and ask them to cover their faces.