Ckay Reacts After He Liked A Hate Speech Directed Toward Wizkid

Ckay has reacted to allegations of liking a hate speech about Wizkid on Twitter.

Wizkid FC dragged Ckay mercilessly, reminding him of Wizkid’s invitation to appear at his 02 performance in London.

This isn’t the first time Ckay has been chastised by Wizkid fans, but this time he turned to Twitter to tell his followers that his account had been hacked and that he wasn’t the one who liked the message.

He also inquired as to why Wizkid FC would despise the person he had flown to London to play at his show. Ckay stated that he is tired of the insults and will no longer interact with trolls.

As a result, for the benefit of his mental health, he said he will be removing himself from Twitter and leaving his management to handle the account. 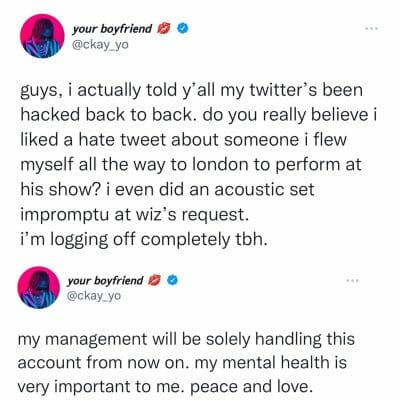