British No.1,Emma Raducanu is thrashed in just 55 minutes in her first match of 2022

Emma Raducanu has suffered her first loss of 2022 to Elena Rybakina in the Sydney Classic less than a week before the start of the Australian Open.

Raducanu’s defeat came in the opening round of the Sydney International. She was originally meant to face Iga Swiatek, world No 9 and 2020 French Open champion. But Swaitek  withdrew from the competition with a rib injury and was replaced in her seeded position by world No 13 Rybakina

Rybakina, who is currently ranked 13th in the world, five places higher than Raducanu – beat the GB star 6-0, 6-1 in just 55 minutes of action. 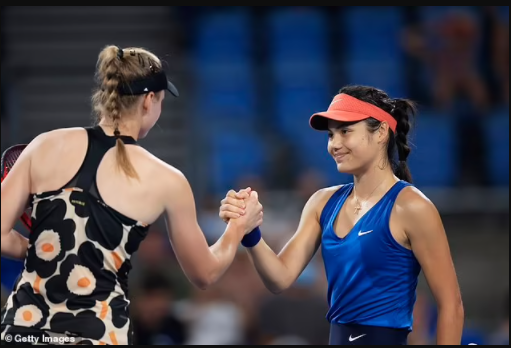 Raducanu, 19, who is set to take part in her first Grand Slam since her historic US Open win, was over-powered by her opponent. She won just 50 percent of her first serves and 13 percent of her second during the opener.

Raducanu saved the first two match points against her with arguably her two best shots of the match, before succumbing to defeat as Rybakina eased into the last 16.

The Sydney International marked Raducanu’s eighth professional tournament and the defeat came during her first match under her new coach Torben Beltz.