Cook, 61, who is worth $1.5billion, enjoyed the luxurious earnings during the 2021 fiscal year, which ended in September, according to SEC filings.

He also now has access to $754million in company shares that vested in August from an old grant, although it is unclear if he has chosen to sell any of that stock. Cook additionally sits on shares worth $37.5million in the company that will vest annually over three years starting in 2023.

His earnings rose after Apple had a stellar year – the company earned $365million in sales and had a 33 percent growth in revenue. 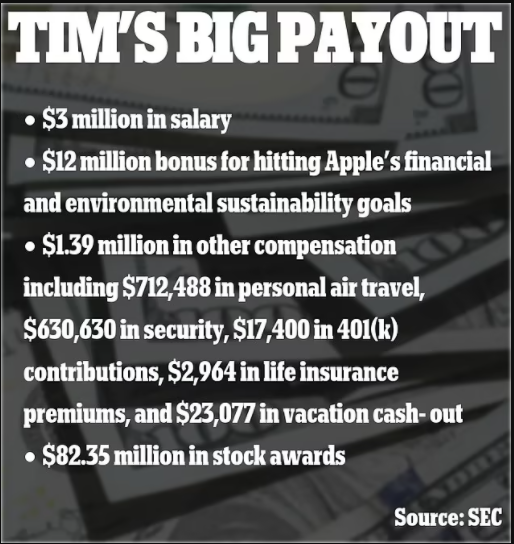 Among the $98million Cook earned in the 2021 fiscal year, $3million of it was his annual salary and he earned another $12million in bonuses for hitting Apple’s financial and environmental sustainability goals.

He also received a large compensation of $1.39million that including: personal air travel, security, 401(k), and life insurance, and vacation payout.

According to the report, the majority of the tech giant’s annual earnings come from stock awards. His 2021 awards earned him $82.35million, but he can’t access the stocks yet, as it’s part of a five-year deal and comes in two parts, the awards were announced on the first day of the 2021 fiscal year, which started in September 2020.

This is Cook’s first equity award since becoming CEO in 2011.

‘It’s been a remarkable decade for Apple and in 2021 Mr. Cook was granted an equity award for the first time since he was promoted to CEO in August 2011,’ Apple said in the SEC filings.