The Nigerian rapper A-Q has revealed that after releasing a new project in commemoration of his late friend, he intends to take a break from music.

Nigerian rapper and songwriter Gilbert Bani popularly known by his stage name A-Q revealed that he plans to release one of the projects created by his late friend before his passing, then take a break from music indefinitely.

He shared this via his Twitter page on Thursday, the 30th of December 2021.

Recall, A-Q recently lost his close friend and collaborator, Beats by Jayy who has produced the majority of his songs so far in this career.

Till the producer’s sad death, their relationship delivered outstanding melodies up until his newest album, Golden.

A-Q recently disclosed on Twitter that he will soon release a project in honour of his late buddy and then take a sabbatical from music. 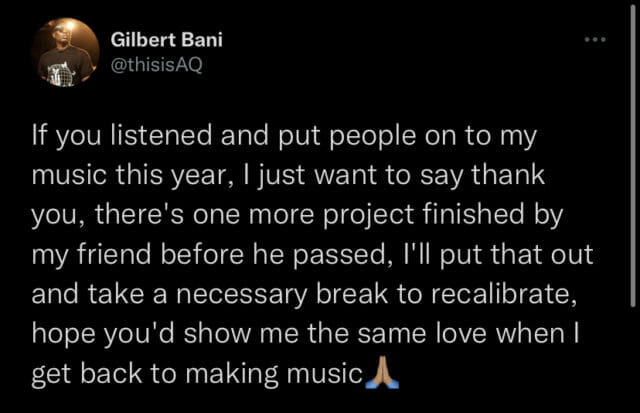