The 32-year-old American actress disclose this in Alexandra Cooper on the Call Her Daddy podcast that her years as a sex worker inspired her choices for adult entertainment.

Fox clarified she never had sex with any of her clients, but added the ‘very controlled environment’ of the dungeons allowed her to delve into her own sexual identity.

‘I’m into weirdly, like, partner swapping and then watching, more [foursomes] vibes,’ she said. ‘I’ve never done it. In my other relationships, I feel like I’ve always been so jealous and so possessive in my relationships. I don’t want to be like that in the future.’

Speaking about her public romance with rapper Kanye West, Julia revealed she’s not intimidated by the idea that he still longs for his estranged wife, Kim Kardashian. 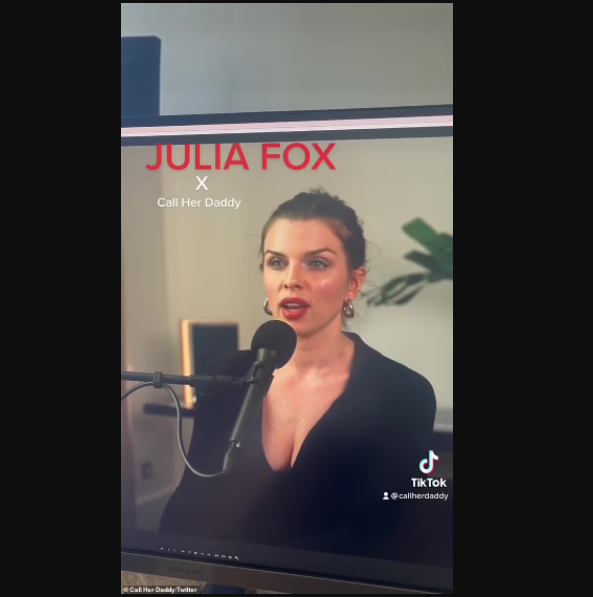 ‘I’m sure there’s still some residual feelings, and that’s normal, it’s human,’ Fox said. ‘I also know that he’s with me now. And that’s all that matters.’

The Milan, Italy-born beauty told Cooper that while they never have formally discussed their romantic status, ‘I call him my boyfriend and he calls me his girlfriend.’

Fox described her romance with West as ‘organic’ and ‘natural,’ and off to a strong beginning.

‘Time will tell, you’ll just see,’ she said. ‘Obviously, it looks a certain way, but people don’t know the conversations happening behind the scenes, and you know, I’ve been around.’

Fox said it was ‘unfortunate’ that people have compared her to Kardashian, saying their only similarities have been fashionable ones.

We’ve worn some of the similar looks, which I knew at the time of wearing them, I knew that Kim had worn it previously,’ Fox said. ‘But I thought it was cool that she had worn it.

‘It is unfortunate because women are always being pitted against each other and obviously there’s 10 years of history that they have prior and I don’t want to ever like step out of line and speak on something that I have no place speaking on.’

Cooper asked Fox if she thought West had been ‘love bombing’ her in the early going, in terms of overwhelming her with romantic gestures, to which she said he didn’t ‘because he doesn’t have like, a shady ulterior motive.’

She continued: ‘Which I think is super crucial in the love-bombing element because you know in a typical narcissistic relationship in that way, it’s like you get love-bombed then you get isolated. It’s like no, actually my friends are now with me 24/7.

‘He’s not trying to like, have me to keep from, like lock me away, no. He wants me to be the best version of myself. Like that is always the conversation, always. Like how am I gonna … live up to my full potential? Which I think is amazing.’

This comes after it was revealed that Kanye West and Julia Fox are in an open relationship and are seeing other people.

According to Page Six,  the rapper, 44, and actress, 32, are in an open relationship and are currently seeing other people.

An  insider close to Julia, said the ‘evolved’ couple share a connection that goes beyond ‘typical norms.’